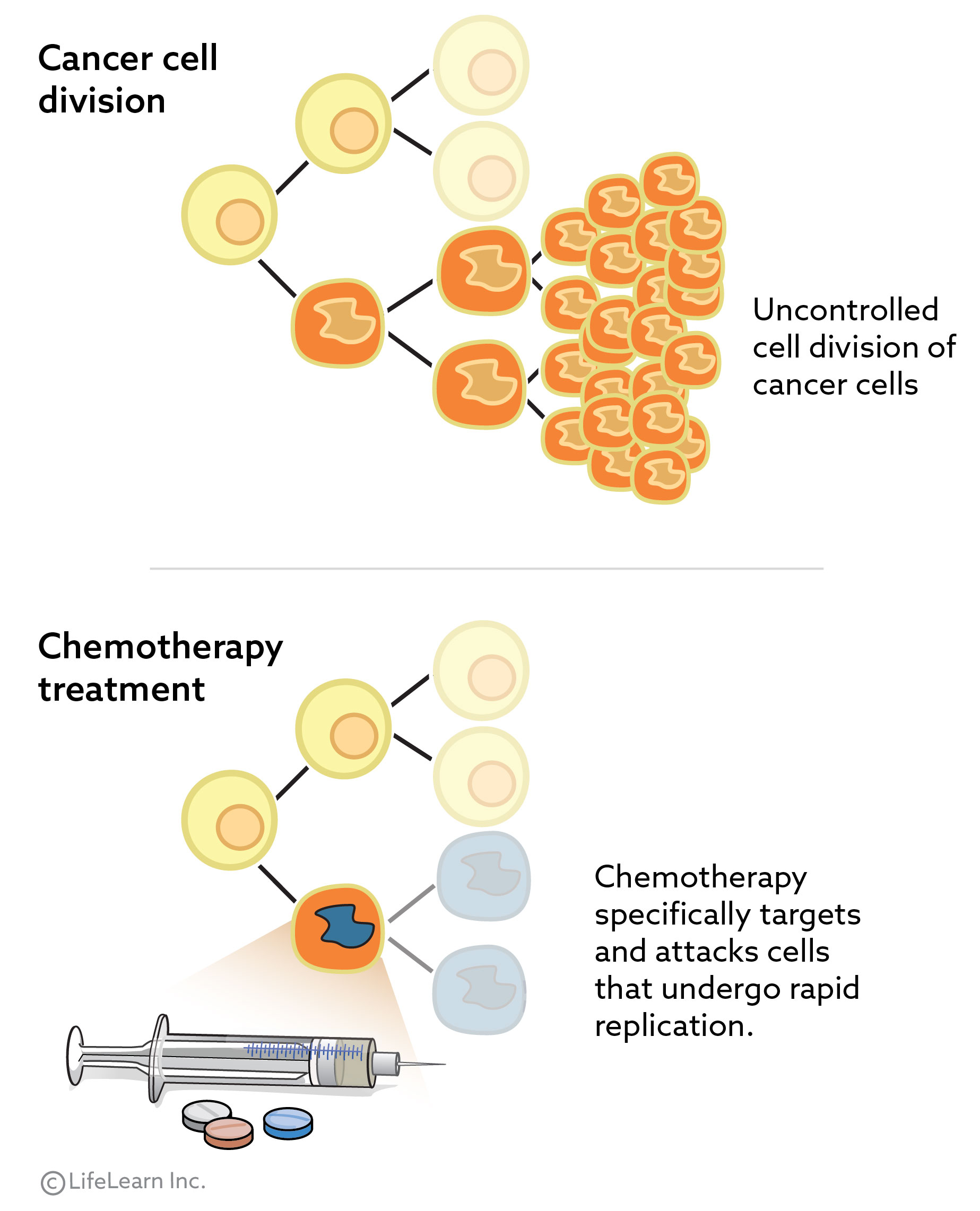 Chemotherapy is the therapeutic use of chemical agents to destroy or inhibit the growth and division of cancer cells. Chemotherapy specifically targets and attacks cells that undergo rapid replication. It does this either by attacking specific processes inside the cell (such as during DNA replication) or by preventing other cellular activities that are required for cell replication. Cancer is a disease characterized by the rapid, continuous, and uncontrolled division (or replication) of cells.

Several areas of the body have cells that normally divide rapidly and continuously, but unlike cancer, they divide in a controlled manner. These areas include the skin (specifically the hair follicles), the intestinal tract, and the bone marrow. Because chemotherapy targets rapidly dividing cells (and is unable to distinguish between normal and abnormal cells), it can affect normal as well as cancer cells.

When is chemotherapy used?

Chemotherapy is usually used when tumors are widespread or when there is significant or immediate risk of spread from the primary tumor location. It is often used following the surgical removal of tumors. In these cases, chemotherapy helps control the cells that might have been left behind (microscopic disease). Controlling these cells with chemotherapy assists in providing long-term control.

"In some cases, chemotherapy is started prior to surgery."

Although chemotherapy is the primary treatment for some cancers, such as lymphoma (a cancer affecting white blood cells), it is rarely used on its own.

In some cases, chemotherapy is started prior to surgery. Shrinking the tumor can make the surgery more manageable (and easier on your pet) and improve outcomes.

How is chemotherapy given?

Since chemotherapy comes in many different forms and types, it is given in many ways. How it is given depends on the type of chemotherapy drug and the drug schedule being used. Traditional protocols are based on administering the highest tolerated dose followed by a break (of one to a few weeks, depending on the protocol) before the next dose. Depending on the drug, chemotherapy may be given as an injection or as an oral tablet.

With certain types of cancer, there is increasing use of metronomic protocols for chemotherapy delivery. Metronomic refers to the chronic, equally spaced delivery of low-dose chemotherapy drugs, usually given daily or every other day. Metronomic chemotherapy has been shown to decrease the ability of tumors to create and grow blood vessels. If this therapy is an option for your pet, it will be discussed with you by your veterinarian or veterinary oncologist.

What are the side effects of chemotherapy?

"Your pet may become prone to infections, and exhibit signs such as lethargy, reduced appetite, and fever."

Chemotherapy can also affect the bone marrow, specifically the production of blood cells. The bone marrow produces white blood cells, red blood cells, and clotting cells (platelets), all of which constantly replicate themselves to replenish the body. Typically, the white blood cells (infection fighting cells) are affected first. As a result, your pet may become prone to infections, and exhibit signs such as lethargy, reduced appetite, and fever, with the overall appearance of feeling unwell. Bloodwork is routinely performed at specific intervals to watch for drops in cell counts and adjust the chemotherapy to keep your pet healthy and happy.

What are some misconceptions about chemotherapy in pets?

A diagnosis of cancer, whether in a person or pet, is always distressing. The thought of chemotherapy, on top of this, can be even more distressing, and most pet owners think that the side effects in their pet will be the same as in people, but this is not true.

The principal goal with cancer care in pets is to provide cancer control without reducing quality of life. With pets, chemotherapy protocols are purposefully designed so the treatment does not become worse than the disease. Because of this, chemotherapy is very well tolerated in most pets. About 80-85% of pets will show no adverse reactions to their chemotherapy. About 10-15% will have mild signs and receive treatment as outpatients (without having to be hospitalized) and only about 5% will have adverse effects that require hospitalization and intensive care.

For people and pets, cancer is no longer seen as a death sentence, but as a chronic disease. Many cancers can now be cured, and many others can be treated effectively. In veterinary medicine, ever more treatment options are becoming available. All treatment options, including chemotherapy, will be discussed with you.

© Copyright 2018 LifeLearn Inc. Used and/or modified with permission under license.